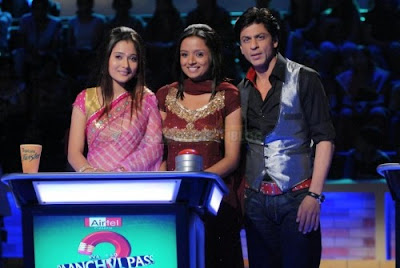 Okay, they are not blonde, but they do represent what “dumb blondes” are supposed to be famous for – their dumbness. Yesterday’s episode of “Kya Aap Panchvi pass sey tez hai” was a special episode with stars from TV soaps making their appearance on the show and wining money for charity.
Sarah Khan(Sadhna) and Parul Chauhan (Ragini) of â€œSapna Babul Kaâ€¦.Bidaaiâ€ were on first and right from the start, they seemed to be perfect candidates to fail a 5th class exam. Usually on the show, insets are shown about the educational achievements of the participants to embarrass them further if they don’t answer a question. But, this was not the case for these two. Maybe, the producers knew that even after “preparing” them for the show, they would make a fool of themselves, that he decided not to embarrass them further. Or, they became models at such an early age that they didn’t have time to complete class 5. How else would you explain the following responses:
Question 1 – Find the number of common nouns beginning with the letter “B” in the following sentence: In Bombay, I met Billoo with a basket in a blue bus.
So, the stars (the two girls) start thinking aloud. Parul says, “Basket and bus must be the two common nouns”. But, the smarter Sara says, “What about Bombay, it is a common place, so it must be a common noun”!!!!
The producers then realised that their questions would prove too tough for this pair, but it was too late. Maybe they should have put Timbuktoo instead of Bombay, then Sara would have said, “Timbuktoo is not such a common place, so it cannot be a common noun”

Question 2 – Neil Armstrong was the first person on the moon. Which country does he belong to?
Parul is quite confident and she says “America”. Shah Rukh, who is aware of their dumbness, wants to take them for a ride and says, “That is the name of the continent. I am looking for the name of the country”. Immediately, the smart Sara says, “New York?”. Shah Rukh then realises that any further discussion would embarrass the entire TV fraternity, so he accepts America and closes the question.

Question 3 – Which is the only mammal which can fly like a bird?
Parul, who has until now been overshadowed in being dumb by Sara, decides to take matter into her own hands and confidently says, “Kangaroo”. Shah Rukh, desperately containing his laughter, goes to the center of the stage and imitates the movement of a Kangaroo and asks, “Are you sure that a Kangaroo flies like a bird?”.

The producers by then had decided that they had had enough of this smart duo and decided to end their round and call on the next group. Now, i realise why TV soaps are so slow and prolong each and every scene. It is not the intention of the director, but it is the adaptability of the TV stars that is the problem. They seem to be so dumb that it takes them forever to understand and show an expression and the director has no other choice, but to capture the entire thing on camera!